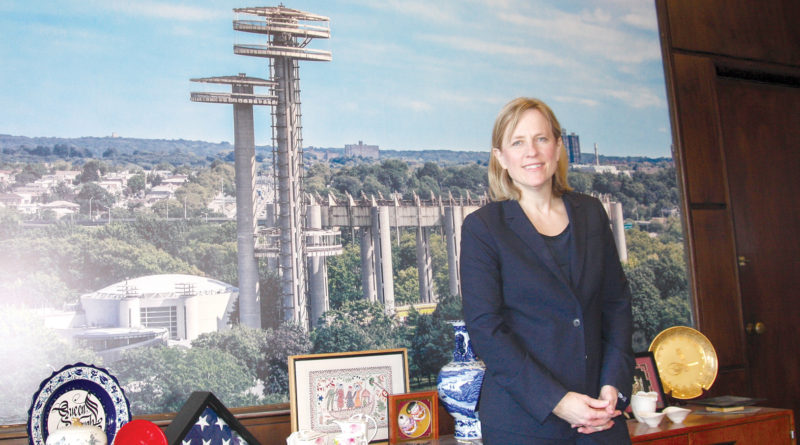 Just days after delivering her State of the Borough address, Borough President Melinda Katz sat down with This Is Queensborough to discuss the state of economic development in the borough and what the future holds for the Queens business community in the coming year.

TIQ: What are some of the economic development projects in Queens that you are especially excited about? So I think the Jamaica NOW plan is coming to fruition. We have a bunch of affordable housing projects that are going up, we have hotels that want to come in, so I think it is a successful plan. The Jamaica leadership team has taken a really great role in guiding the future of Jamaica. We have $250,000 investment from NYC & Company for marketing, so I’m very proud of that investment.

And clearly you have Long Island City going up organically and in droves. We put all of the stakeholders, like tenants and owners and community boards and the city, at the table for the Long Island City strategic plan that is going to be out soon.

We want to really figure out how Long Island City can be a western hub and the next big tech neighborhood while still keeping the community and investing capital dollars in the schools and building Hunters Point Library. So those are big projects that are happening now and it’s exciting.

TIQ: You mentioned in your State of the Borough speech that the job growth in the tech industry isn’t as robust as other sectors in Queens, why do you think that is?

KATZ: I think we’re trying to resolve that now to make sure that our folks are trained, and we are able to graduate our people from high school to go into college tech ready. So we’re working on it, and I think the city has an interest to making sure that we keep up.

At the same time, we have Cornell Tech going up right across the river from us, and the only access to Cornell Tech by car is from Queens. We would love it if people who graduated from there came and stayed and made their homes in Long Island City and east of there.

TIQ: Are there any neighborhoods in Queens that you think are on the verge of a real economic boom?

KATZ: I think the Rockaways are poised to take a step forward. The permanent ferry has been key in bringing people to the Rockaways. The fact is that last summer too many people were taking the ferry and the city had to add another boat there, which we told them they would have to do.

But with the permanency of a transportation system that isn’t just the A train, the land out there becomes more attractive for businesses to develop. And I don’t mean just apartment buildings, I mean real anchor tenants that we would like to see out there. With the permanency of the ferry, we think that is actually going to happen. I think the Rockaways is the next place to look for the development of businesses and the creation of job growth.

TIQ: What’s the future hold in store for Willets Point?

KATZ: I would like to see a soccer stadium, I haven’t made that a secret. What’s clear right now is that Willets Points is going to be 100 percent affordable housing, that’s something the city has talked about. They still don’t have a contract to begin, but I know they are working very closely on it with the developers.

The soccer stadium is not decided on yet, I’m trying to give it a little push. It’s a good way to pay for the project, but it’s also good for the people of the borough. The city doesn’t have a first-class permanent soccer stadium, and I think it’s a great place for it. You add the soccer stadium with Citi Field, the USTA, and all of the great sports and programs we have at Flushing Meadows Park, I think it’s a win-win for everyone, but we’re still working on it.

The city would like to have an affordable housing component done soon. The soccer stadium, I know that we are going to have a timeline, but it hasn’t been made public yet.

TIQ: What is the primary challenge to the growth of small and medium-sized businesses in Queens?

KATZ: We have someone who focuses on small businesses, and what we keep hearing constantly is that the rents are too high. Queens is desirable now, people want to come here, live here, play here spend their money here, work here, make their money here, and high rents are a problem.

In Flushing we hear it all the time. There will be four or five retail businesses in one location because they just can’t afford to pay the monthly rent. I think that’s a real problem, as well as getting priced out by larger businesses. It’s hard to have a small hardware store when Home Depot is around the bend.

That’s an important generator for the borough. The airports are the second largest employer in the borough after the healthcare industry. We do a lot of work matching local businesses with the airports.

TIQ: Congestion pricing is causing anxiety among small businesses that go in and out of Manhattan, do you have a position on the various proposals out there?

KATZ: Not yet. I was against tolling all the bridges and still am. I think the governor’s plan of not tolling the bridges, but having an area where you pay to get into and have it equitable somehow is a good start, but I’m not ready to come out in full support yet.

TIQ: What does 2018 hold in store the business community of Queens?

KATZ: I think we are going to see a lot more people wanting to come here and invest. I think the neighborhoods of the Rockaways and Jamaica will flourish. Folks are starting to realize that Long Island City is great, but it’s being built and the investment is there already. I think they are going to start looking eastward. And hopefully the tech plan for western Queens generates a whole lot of people coming east.

I think it’s matter of figuring out how to generate more jobs, certainly LaGuardia is already doing that now, and Kennedy is going to do it more. The Airtrain is going to start, they say, phase two. It’s supposed to go to Willets Point, where there should be a central hub for the 7 train, Long Island Rail Road and the Airtrain.

And I would like to see a one-seat ride to Kennedy from Manhattan. It’s logical and it would be a better use for that train. The tracks are there, you just have to figure out a way to keep the train going. I don’t think anyone thinks that is an undoable proposition.

In 2018, I hope we keep building on the investments we made over the last four years. It’s the beginning of my first four years again; it’s going to be good. FUTURE OF RETAIL: BLEND OF WEB AND BRICKS?